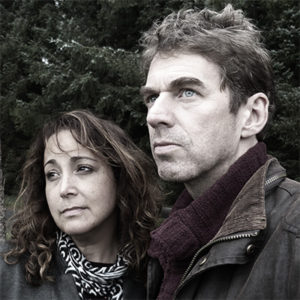 The Aeon Wanderers were formed when Owen and Andrea met in an online music collaboration collective.  Andrea joined in 2012 and was a frequent contributor for the first two years, but she took an hiatus in 2014, just as Owen joined.  Their paths crossed once or twice but it was to be another two years before they properly joined forces.  With just over 3000 miles between them, The Aeon Wanderers are one of the longest duos on the planet.

Andrea Kremer was a theatre kid in her early years, making her mark in many stage and choral performances.  She later moved into the business side of the music industry, specialising in marketing and media.  Although musical pursuits took to the wings for a while, in recent years she’s rediscovered her voice, and has performed with Boston-area bands including The Boston Ill Harmonic and Big Giant.  She also sometimes records cover songs with friends.

Owen Hodgson began playing piano way too early in life but, unlike Andrea, was reluctant to demonstrate the fact in public for many years, probably due to being British.  He began secretively writing and recording orchestral rock in 1988 as Thinking Aloud.  A onetime geologist and now a student of psychology, he’s now based in Scotland.  Side projects include So?, a musical collaboration with Canadian singer/songwriter Steve Jones. He’s also produced nearly 300 music videos for various artists.

Beyond being wanderers, Andrea and Owen are also a creative/design/video production team for hire, at Shake & Howdy, Inc., putting their skills to use for other bands and artists. (Get in touch!)